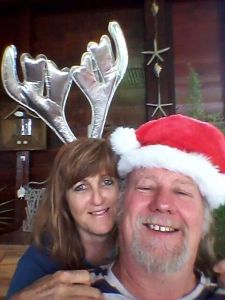 Every year I watch as all the “happy families” gather for their Christmas celebration and an envy sets in like a rot! You see for some years now I have not experienced the delight of big family gatherings with roast turkey and stuffing with a side of gammon.This has been entirely my choice! Would I love it? why yes and Christmas pudding with lashings of brandy butter, but a lump develops in my throat at this time of year as I think of my mother’s last Christmas when the magic of Christmas left me only to sprinkle tiny bits of Christmas joy in my life occasionally.

I’ve experienced many varied Christmas’ both happy and sad. Even in times when some family members didn’t get on, I would sit quietly hoping that somehow even though my beloved mother was gone, she would revisit me in those lovely Christmas carols and funny songs. “I saw mummy kissing Santa Claus” was a favorite in our house and I can remember being interviewed by my brother when I was a child like a celebrity with a fan club. The recorded messages would be sent to absent friends overseas.

Christmas’ in our childhood home were filled with all the Christmas traditions of hot turkey dinners on a sweltering summers days in Bulawayo and so much brandy in the brandy butter that could knock not only your socks off but your teeth out! Alcohol at Christmas was never truly the ideal companion and my Dad would relish the idea of a beer before breakfast. Whoever said that everything including my Father should be soaked in brandy and beer?

When my Mum died my Dad tried his best to carry out the Christmas tradition of wearing his top hat to the table and passing out in the daisy bush, but it seemed without her I could not rekindle the Christmas flame.

Mixed into early Christmas memories with my beloved boys were the memories of my Mum. Once I embarked on single parenthood I didn’t want to let those bad memories spoil Christmas. Many happy Christmas’ were spent with my brother and his family drinking coke and eating mince pies for breakfast and opening presents together. We spent endless hours decorating the huge live pine tree with handmade decorations and the kids put on plays to delight us.

Times of sadness came when I had to relinquish control of Christmas and let my beloved sons be with their father in the Eastern Cape for Christmas. I can remember one Christmas being entirely alone with a resolve that I would be fine. The bravado dissipated by 6 in the morning when I could not hear the scurrying of little feet and the Church bells were ringing in the distance.

My friend who had a very heavy hand with a bottle of red wine picked me up to go out for lunch at someone who I didn’t know from a bar of soap’s house, not a good idea! That day I helped them empty the wine cellar in an attempt to endues a haze of forgetfulness. The tears came as I shut the door on the madness and returned to the lonely quietness of my flat. I vowed to myself that I would never revisit “stok siel aleen Christmas”. (completely alone)

Years went by and my kids grew and I realized that I could not expect to have the “happy families” traditional Christmas’ that I saw all around me.

I met a wonderful man and with him came the traditional family with old folks, good tidings to all etc but my Christmas cynicism has firmly set in by then. I hadn’t quite developed into the infamous Grinch but I wasn’t willing to partake in an eating frenzy that lasted from Christmas Eve till midnight on boxing day. All the brandy butter in the world could not revive my Christmas cheer. I dutifully made salads and washed the dishes and put on my happy face but secretly I longed to be in a place where Christmas did not exist.

You see the stories of people who get so depressed when Christmas ends, when all the glittery decorations come down and the podgy stomach comes out was not going to be me. I recall the sad story of a man who could not bear to take his decorations down and would keep them up for the entire year. How sad that he needed tinsel and pretty ornaments to complete his life.

So you can call me cynical and throw mince pies at me at midnight, realistically I can’t go back to those carefree times when father Christmas was real and tickies appeared in the Christmas pudding. I’m happy to discard the consumerism that is Christmas and enjoy the real peace that has been promised to us.

Don’t get me wrong I have had many marvelous Christmas’ with my awesome family and without them. I’ve known the heartache of loneliness and the joy of togetherness.

I’ve sat and gorged my face till I couldn’t stand, not a good memory!

I’ve danced with people who know the rhythm of Africa and love eating mountains of meat and marshmallows for desert.

I’ve dressed up my dogs in antlers and Christmas outfits and recorded Christmas songs on videos, and no it’s not on You tube!

I’ve stacked my cupboards with an array of chocolates that even the Easter bunny would envy just to try and delight in the consumerism that is Christmas. Any excuse to eat chocolate!

Yes and we have sung with our grown kids at the top of our voices to our proud Christmas tree, a very good memory!

I’ve had a delightful vegan Christmas with no meat in sight. I could still stand after eating!

Two years ago on Christmas day I told the vet to put my cat down because she was so ill, but my son wouldn’t have it and she was admitted to intensive care. A whole lot of cash later and a few lives under her belt she lives to give me the cold shoulder for another Christmas. Nine lives are not enough

I wouldn’t change any of these memories for the world, even the sad ones bring me to a recollection of our beloved risen Christ, who was despised and rejected by men and was a man of sorrows and was acquainted with grief. He died for our transgressions and by His wounds we are healed.  He has always been with me and at this time of the year I am grateful that He came down to earth from Heaven and He knows our suffering.

I can dance with the best of them, I can sing out of tune, I love my share of Christmas delights, but I would give it all up if I didn’t know Him!!!